So, I recently received the following recommendations from Quora of topics / people to follow: 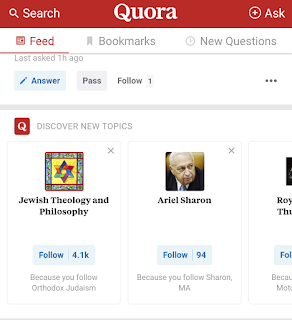 This merits some work to figure out what is going on here. Note the first recommendation to follow "Jewish Theology and Philosophy." Expected recommendation: I am Jewish and I 'follow' several other Jewish topics on Quora. The Ariel Sharon recommendation is, however, thought provoking. It is true that Ariel Sharon, deceased in 2014, was Jewish and was a leader of the State of Israel. Might be reasonable to suggest this recommendation based on my Judaism. Maybe Quora has access to some of my personal data (unlikely?) that shows I've been in Israel several times (I got married there). Quora says it is making the recommendation, "Because you follow Sharon, MA." At first glance, you might think this is an AI/DL/ML fail confusing the name of the person with the name of the town. I follow Sharon, MA because that is where I grew up. If you know a little more about Sharon, you know that it has (or had) a large Jewish population. It also has had a number of youth make various trips to Israel and a Jewish, Sharon teen was killed in Israel not too long ago. So, now, it's looking like the AI/DL/ML algorithm is really smart and has examined far more data that we would think. Or not. As we start to develop AI/DL/ML in medical and medical imaging contexts, we're going to run into similar situations where we are not quite sure if the AI/DL/ML is brilliant or a moron. Of course, we're all used to dealing with the 'idiot savant' resident who occasionally blurts out a brilliant answer. Interesting times ahead.
Posted by Dave at 2:33 PM No comments:

A Prayer for the Motorcyclist

May he who blessed our forefathers Abraham, Isaac and Jacob, and our foremothers Sarah, Rivka, Rachel and Leah bless all who ride the iron horse, their families and mechanics and all that is theirs.
May the Holy One, blessed be He watch over and save the people of two or three wheels from every trouble and danger from flat tires to running out of gas.
May he shield them from radar and rain, thieves and bad drivers.
We implore him to grant their wishes for long safe trips through sunshine and winding roads leading home to their beloved families.

All feedback and grammatical corrections welcome. Keep the shiny side up.

First, let us not shed a tear for the health insurers threatening to leave (or having recently left) unprofitable state health insurance exchanges. None of the top 5 (10?) health insurers in the United States (outside the federal government) failed to make a profit (or revenues in excess of expenses, for those not-for-profits) in their most recent fiscal year. Many (most?) have large reserves or endowments that would put many to shame. Admittedly, some are losing money on their exchange plans, but that is how the health insurance game is meant to be played whether in private or in public. The wealthy must subsidize the poor and the healthy the ill (and the young, the old). They could and should amortize any ACA losses across their other plans. So, I propose the following language to be put on the books of any state where ACA exchanges are at risk:
"Any entity underwriting health insurance of any kind in the great State of XX shall also offer at least one set of conforming medal (bronze, silver and gold) plans in the State of XX's health insurance exchange." In the unlikely event that all health insurance carriers leave the state, that's a great vote for a state-wide single payer plan which is where we should be anyway.
Posted by Dave at 4:59 PM 2 comments: