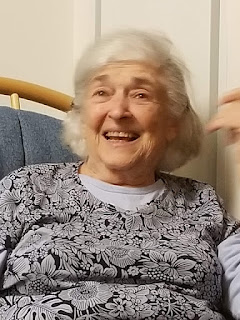 My mother, Esther Marcovski Channin, passed away, in her sleep, on Sunday, April 19, 2020 כה ניםן  5780), as result of complications from Covid-19. She was 90 years old. I am the proud son of an immigrant refugee. My mother was born in Romania in 1930. In 1939, just a few months before Nazi Germany invaded, my mother and her parents fled to America. 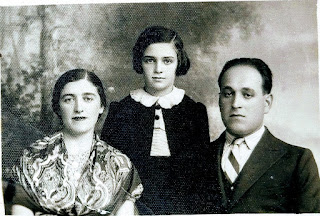 They were the last of our family to escape.  My mother never considered herself a Holocaust survivor but rather an ‘escapee’

After a brief stint in NYC, they settled in Colchester, CT. A small town with a small Jewish community close enough to the cousins in NYC but also to Hartford, CT which was bustling in war effort. My mother began her career as a teacher at the age of 10. Though both of her parents spoke four languages, none of them were English (Russian, Romanian, Yiddish and Hebrew). My mother would come home from American public school and repeat her lessons in English to my grandparents. She would translate the radio broadcasts for them. I have a strong memory of my Zayde’s black transistor radio constantly tuned to CBS Radio News in NYC.
My mother was a stellar student, top of her class, though, in full disclosure, class size was small. Ironically, for an observant, eastern European, Jewish girl, her school was named, “Bacon Academy". 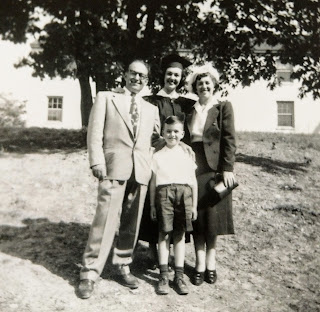 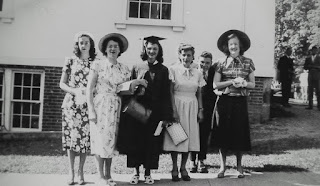 She had one brother, born in Colchester, Norman, sixteen years her junior 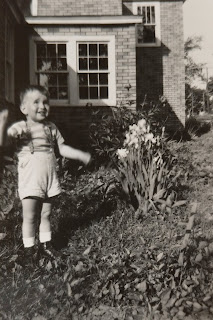 , whom she loved dearly. He and his wife made Aliyah to Israel in 1972. 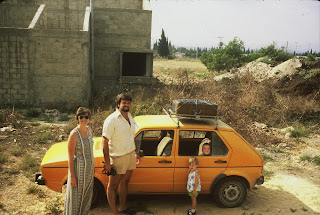 One of the great pleasures of her life was to visit them, their children Ari and Dina and eventually my grandparents on numerous trips to Israel. 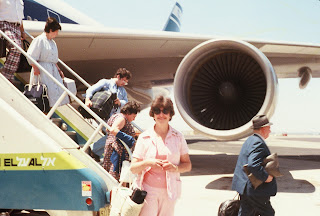 She had a profound, lifelong love of the State of Israel.
From Colchester, she went to the University of Connecticut in Storrs. She received a Bachelor’s degree in Education, there, in 1952, and a Master’s in Education, in 1956. She was active in many aspects of student life, running for student office, and other campus organizations. 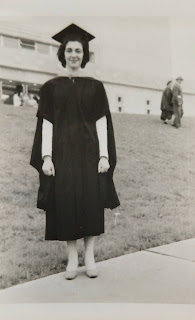 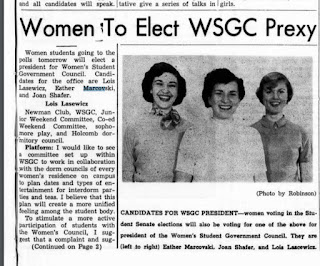 This was the breeding ground for what would be a lifetime of teaching and scholarship, but also her lifelong activism on behalf of the less fortunate.

She was also, by all accounts, one of, if not the most beautiful Jewish woman on campus. 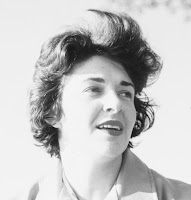 We have a picture of her in formal wear sitting on the quadrangle lawn with her dress about her that is movie studio beautiful. So, it was not at all surprising that the prettiest Jewish woman on campus met one of the most popular and dashing Jewish jocks, later a swashbuckling air force pilot. They were married in June of 1956. An older cousin of mine, a child at the time, said that she was like a fairy tale, Mary Poppins, magical aunt.

She worked as a middle school teacher 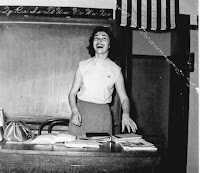 while earning her Master’s degree and then after marriage to support her husband in medical school. When I was in sixth grade, my mother came to a PTA meeting. I noticed she had a private conversation with my teacher. I later found out that my sixth grade teacher had my mother for sixth grade, years before. 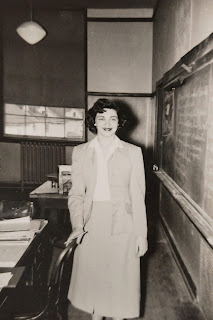 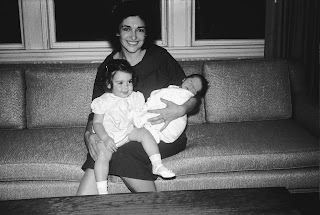 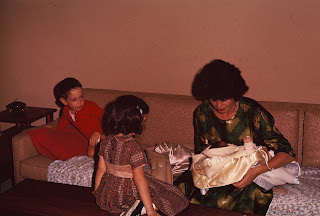 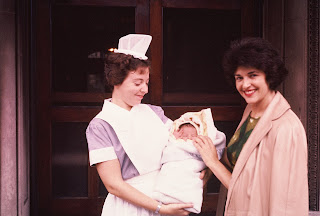 We moved around a bit as my father completed his training but in 1966 we settled in Sharon, Massachusetts where she remained for the rest of her life. She was a fantastic kosher cook mostly learning at her mother’s side, the latter could have easily won three Kosher Michelin stars had such a thing existed.  We ate well, very well, whether at home or on the road at the grandparents; all the Jewish classics and then some, supplemented by 1970s and 1980s ‘new age’ concoctions. 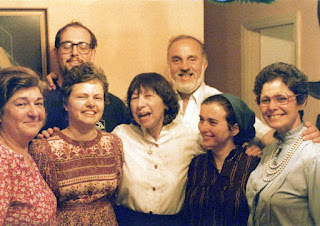 My mother slowly became more observant and a pillar of the conservative and new orthodox Jewish synagogues springing up in the town of Sharon. She developed many close friendships in the Jewish community, many of them lasting until her death. One close friend wrote, "We loved your Mother. She never looked at life as is, but always as it could be.
She battled fearlessly for the vulnerable and the weak in the work place, the schools and the community. She badgered selectmen, congressmen and senators. No one was spared  her voice or pen.
And children. She loved children! She was a pied piper for all our kids. She shepherded them from cradle to fatherhood  sharing in their triumphs in preschool, boy scouts, graduation and Israel."
She volunteered for every community activity. She was a life member of Hadassah (since 1972) and contributed to the best of her abilities to every Jewish charity and institution. We always had a JNF pushke in the house. 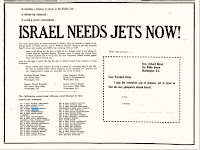 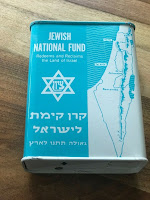 In particular, she enjoyed building a Sukkah every year and having the community visit. 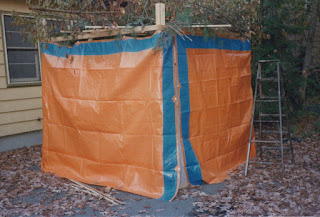 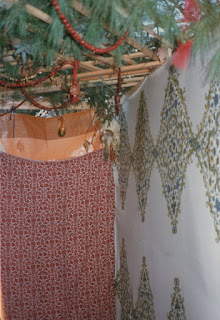 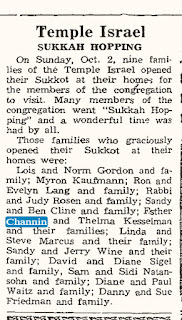 Her generosity extended to important non-Jewish causes as well. We were only allowed to go out on Halloween (a goyish holiday) because we would collect money in the orange, cardboard, UNICEF pushkes 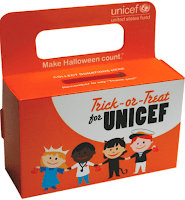 (but she let us keep any kosher candy we got on the side). For several years, she drove us 45 minutes each way to attend yeshiva. She lived a life that was the epitome of Torah, chessed and tzedakah. 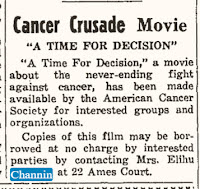 After my parents’ divorce, she returned to work as a guidance counselor and tutor. Yes, she was a guidance counselor in my high school while I was a student there, with the resultant stunting of any misbehavior on my part. She was a founder of an alternative high school for talented, creative teens who didn't flourish in traditional educational structures. She was active in the P.T.A and the School Board and a regular contributor of Letters to the Editor of the local paper whenever she felt the local politicians strayed from their duty, especially to students and the handicapped. She was also active in the local chapter of the League of Women Voters and several other civic organizations.
When the second wave of deinstitutionalization of mental health patients came to Massachusetts in the 1970s, my mother worked for the State, as a social worker, to place these individuals in the community. She mastered IQ and other testing with her in house guinea pigs. She was a champion for the disabled and the mentally ill and fought injustice wherever she could find it.
In later years, she lived alone. Her house was filled with books and the many local libraries became a second home to her wherever she lived. Among many other collections, she had a complete, eleven volume set of “The Story of Civilization”, by Will and Ariel Durant and to this day, I am convinced she is the only one to have read it cover to cover. She enjoyed modern Jewish philosophical texts and lectures as well as the social sciences.
She lived to see many milestones of her children 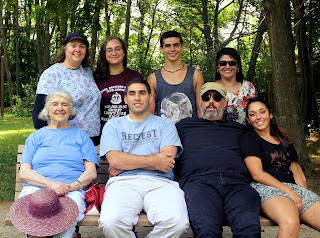 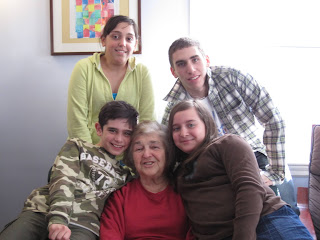 and four beloved grandchildren (Tali, Yoni, Joshua and Arielle) as well as her niece and nephew (Ari and Dina). She saw them all grow into fine young adults. In the end, she was taken by the Covid-19 pandemic. It was not surprising or really unexpected given that she was living in a nursing home and with her high risk co-morbidities. 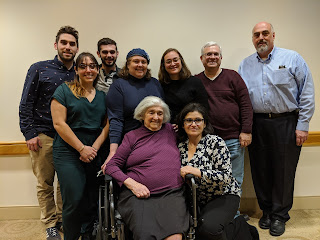 What is ironic is that her last and deepest wish, to be buried alongside her family in Israel, will be delayed for just a little bit longer.
Posted by Dave at 5:53 PM No comments: